With the Nederburg Auction and the Cape Winemakers Guild Auction in the last couple of months showing some wonderful prices realised for South African wines, here is a look at the five most expensive South African wines available in the UK. Some of us mere mortals might just be able to dream of sipping a glass or two…

Working in the wine trade in London, I am asked on a daily basis for the best possible prices on wines that clients hope to get their hands on. For the unassuming, the best possible site to go to is winesearcher.com. The site is easy to use and they have a HUGE history and library of wine prices.

Their top 5 is as follows and is based on the average price of a standard bottle, counting all available vintages (the Saxenburg is NOT currently available, according to their website, in the UK) and the information is drawn from their database of 50,158 price lists, totalling 6,719,884 wine offers.

Vergelegen or “Remotely Situated” is a wine estate in Somerset West, in the Western Cape, South Africa. In 1700, the estate was given to (or taken by) the early Governor of the Cape and general bad boy, Willem Adriaan van der Stel (Simon’s son). Van der Stel abused the resources of his employer, the Dutch East India Company, to improve the estate. This upset a lot of people and in 1706 a number of free burghers (citizens), lead by Adam Tas of Libertas, complained about van der Stel’s illegal activities. As a consequence of their complaints, van der Stel and other officials were sacked in 1707, and three-quarters of the original Vergelegen estate was sold off at a public Auction, dividing it into several farms at the time.

In 1992, Vergelgen produced its first wines under the current owners, the Barlow Family, and its
wines have won numerous awards, including the coveted Chateau Pichon Longueville Trophy twice.

The “V” is the flagship or Estate wine from Vergelegen and many wine writers and commentators praise its quality. A Bordeaux blend made up of mostly Cabernet Sauvignon, it shows mighty character and aged, it has an elegance to it that some say justify its price.

Saxenburg estate is situated between Kuilsrivier and Stellenbosch. The farm’s history dates back to the 1690’s when the land was granted to Joachim Sax from Germany by then Governor Simon van der Stel (the bad boy’s dad, mentioned earlier). According to official records, the farm Saxenburg changed ownership 37 times between 1701 and 1989. Between September 1980 and June 1989, Peninsula Quarries Limited owned the farm for the purpose of mining. Fortunately, mining rights were never granted.

The Vintage Select Shiraz has won many prizes over the years and is also their Estate or flagship wine. A fine example of a great Shiraz and likened to many top Rhone wines at much higher prices. 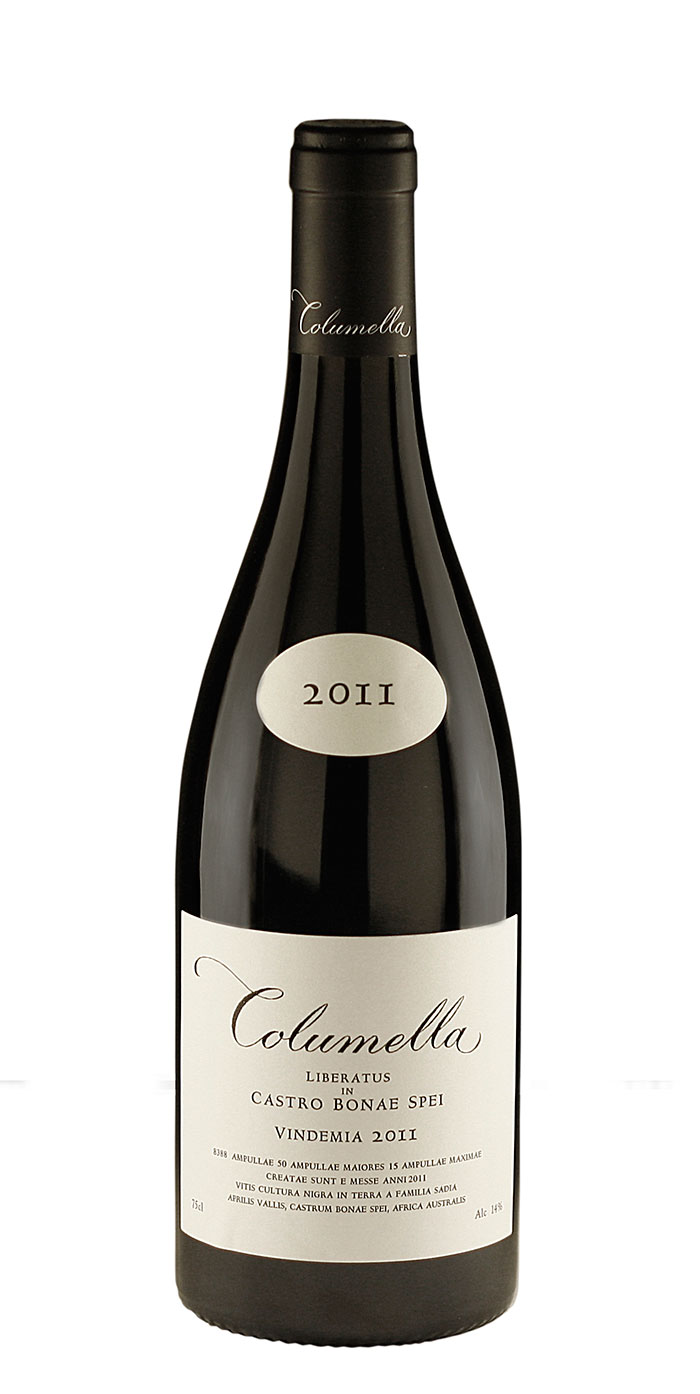 The “young gun” on the list, Eben Sadie started quite recently compared to the rest of the lot. He is probably the most favourite wine maker of most UK wine writers and funnily enough doesn’t enjoy being called a wine maker!
Sadie has been described as an enfant terrible, South Africa’s first certified celebrity winemaker, and by his supporters, as “one of the greatest and most original winemakers in the southern hemisphere”.

After a stint working in various vineyards across the world, in 1998 he started seriously in South Africa under Charles Back from Spice Route, becoming head winemaker in a very short time.

The first vintage of Columella in 2000 began on an exceptionally small scale of approximately 5000 bottles. The first two vintages were produced at the Spice Route facilities until Sadie established Sadie Family Wines with roughly £700.00 and a couple of wine barrels. It is very much a family orientated operation with only Eben and his brother and sister employed, although an assistant wine maker, Paul Jordan, has now been roped in.

The wine is exceptionally elegant for a Rhone blend and this is where it stands apart from its counterparts in South Africa (some might say the world).

*Columella was the most important writer on agriculture of the Roman Empire.

Second youngest on the list is Bouchard Finlayson situated in the ward of Walker Bay. Established in 1989, it is classed as a boutique winery dedicated to the making of cool climate grape varieties such as Pinot Noir, Chardonnay and Sauvignon Blanc.

The 125-hectare property only has about 25 hectares under vine; the rest is mountain land, covered with fynbos. There is a strong belief in Bio-Diversity at the Estate and thus the reason for the small proportion of vines planted as a whole.

Peter Finlayson is regarded as the “Pinot King” of South Africa. A graduate oenologist from Stellenbosch University, he furthered his studies in the Rheingau in 1975. After a stint at Boschendal winery, he set up the first winery in the Hemel-en-Aarde valley. In 1989, Peter established Bouchard Finlayson together with business partner Michael Clark.

The “Tête de Cuvée” is made up by selecting a blend from a handful of chosen, best barrels in the cellar from a particular vintage. Not every vintage produces this wine and it is this rarity that has given rise to the cult following of this gorgeous Burgundian-esc wine with the price tag to match.

*Peter was the first Winemaker in the Hemel-en-Aarde Valley.

Klein Constantia is in the suburb of Constantia in Cape Town, South Africa and steeped in History.
It was the first wine farm in Southern Africa, established in 1685 by the VOC Governor of the Cape Simon van der Stel (again the daddy to the bad boy). Van der Stel was a keen viticulturist and had been the first to recognize the potential of planting vines in the decomposed granite soil.

Following van der Stel’s death in 1712, the estate was broken up and sold in three parts (Groot Constantia; Klein Constantia; and Bergvliet). Vin de Constance is made from dried (on the vine) Muscat de Frontignan or as I like to say, “rosyntjie trosse”. It is definitely the most iconic and history steeped wine from South Africa. On his deathbed, Napoleon refused everything offered to him but a glass of Constantia wine after having shipped 300 gallons to his abode on St. Helena while in exile. (Arende anyone? No? OK)

Baudelaire, Dickens, Austen and many more wrote about it. Kings, Queens and everyone in between drank it. Today Vin de Constance is back where it belongs and unfortunately for us mortals, it comes with a price tag. A great sweet wine that has the potential to keep up with the world’s best.

Quite frightening, interesting and mindboggling all at the same time.